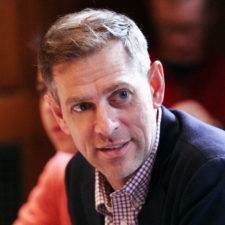 R.J. Snell is Editor-in-Chief of Public Discourse and Director of the Center on the University and Intellectual Life at the Witherspoon Institute. Previously, he was for many years Professor of Philosophy and Director of the Philosophy Program at Eastern University and the Templeton Honors College, where he founded and directed the Agora Institute for Civic Virtue and the Common Good.

He earned his M.A. in philosophy at Boston College, and his Ph.D. in philosophy at Marquette University. His research interests include the liberal arts, ethics, natural law theory, Thomas Aquinas, the Catholic intellectual tradition, and the work of Bernard Lonergan, SJ.

Snell is the author of Through a Glass Darkly: Bernard Lonergan and Richard Rorty on Knowing without a God’s-eye View (Marquette, 2006), Authentic Cosmopolitanism (with Steve Cone, Pickwick, 2013), The Perspective of Love: Natural Law in a New Mode (Pickwick, 2014), Acedia and Its Discontents (Angelico, 2015), and co-editor of Subjectivity: Ancient and Modern (Lexington, 2016) and Nature: Ancient and Modern (Lexington), as well as articles, chapters, and essays in a variety of scholarly and popular venues. He and his family reside in the Princeton area.